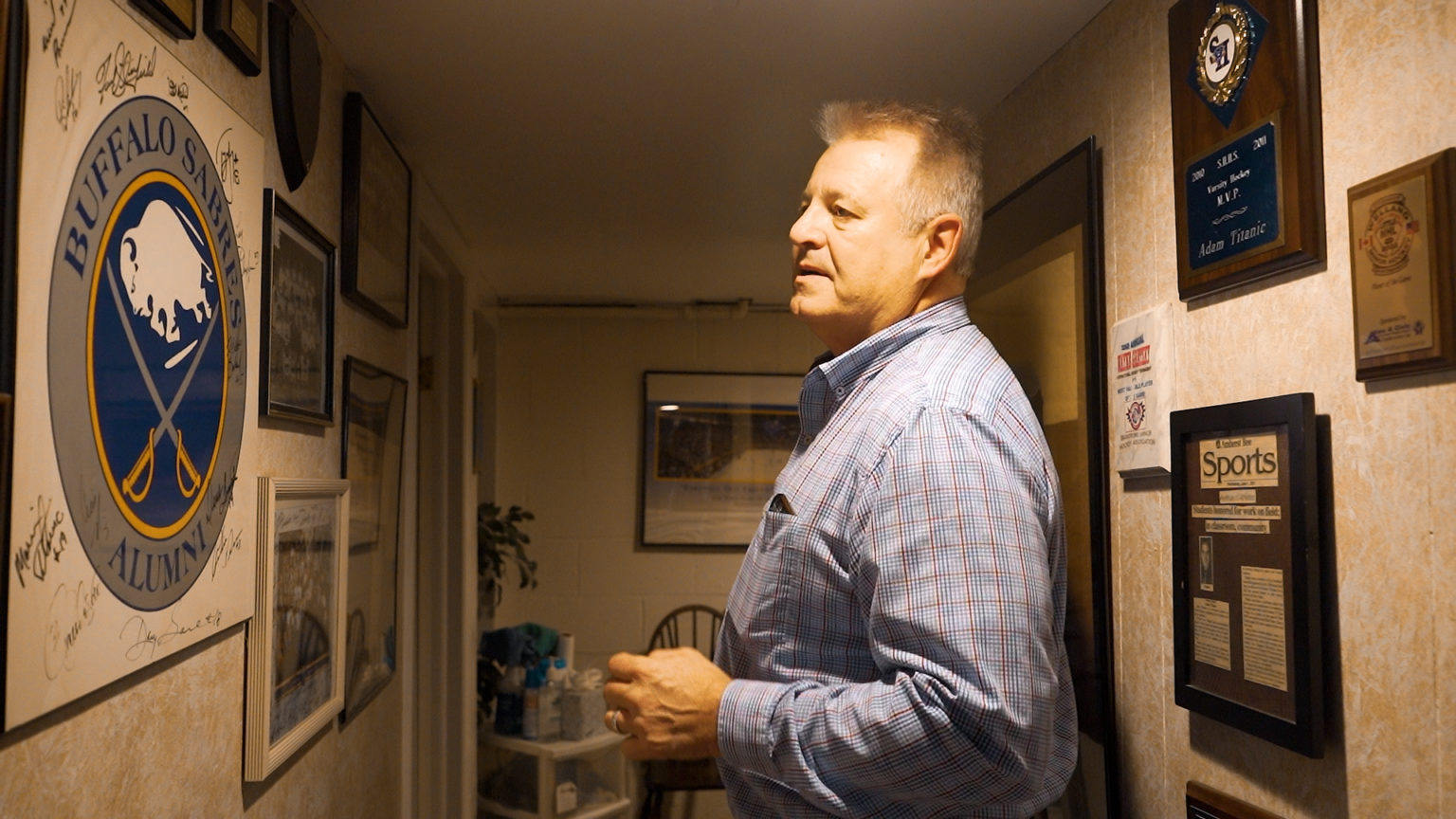 We sat down with three professional athletes, Connor Knapp and Morris Titanic (Buffalo Sabres), and Maddie Elia (Buffalo Beauts) who hung up their skates, and transitioned from their successful professional hockey careers into regular working life in Buffalo. And the trio have certainly made the most of their new direction!

Any pro-athlete will tell you, it’s impossible to know when retirement will rear its head. It comes at a different time and in different avenues for everybody.

Connor Knapp grew up in York, N.Y., a small town south of Rochester. He and his three siblings grew up loving hockey, but the Knapp family had even more in common – they all played goaltender. “We had this big van, and sometimes we fit four sets of [goalie] equipment in there,” Knapp said of his early hockey days. “My oldest brother got into it, and there was just this follow-on effect … We had a madhouse sometimes growing up.”

Knapp’s skill at the goaltender position took him to Boston to play for the Jr. Bruins when he was 17 before heading to the college level where he played at Miami University (Ohio) for four years, going 46-22-11 in his career with the RedHawks.

In 2009, after his freshman year at Miami, a dream came true. He was selected by the Buffalo Sabres 164th overall in the sixth round of that year’s NHL Entry Draft, and would then sign a two-year entry level contract with the Sabres in 2012.

His only NHL action came during the tail end of the 2014 season, when he suited up between the pipes twice for the Sabres: first in relief of an injured Matt Hackett against the Boston Bruins, and then starting for Buffalo against the New York Islanders in the 2013-14 season finale, a 4-3 shootout loss that saw Knapp make 22 saves.

As luck would have it, Knapp’s first NHL save came on a shot from former Bruin Reilly Smith, his teammate at Miami.

“Getting a home start, the last game of the season – certainly would’ve wanted to win it – but that was a cool experience,” Knapp said. “I didn’t expect to play in Boston, Matt Hackett was there at the time and he ended up getting hurt, a really bad injury … It was a weird season for the team, we weren’t doing too well, and Boston had to win that game for the President’s Trophy. It was just crazy; you’re not really expecting to play and then you’re seeing guys like Tuuka Rask at the other end.”

The final hectic years of his career saw Knapp play in Florida, Alaska, Pennsylvania and North Carolina for various minor league teams. He retired in 2017 and made the transition into the work world. It just so happened that Knapp’s next venture would be one with a tie to his career. He is now the CEO and founder of Sterling Heart Care, a health care management company focusing on cardiovascular disease. During his career, he used an ECP (External Counterpulsation) device for recovery purposes, and it became a fascination of his that he would pursue after his hockey days were over.

After speaking with the manufacturer of the device and learning more about the health and heart care industry, Sterling Heart Care was born and rooted down in Buffalo.

“[Heart and health care] went from something I was curious about, to something I was passionate about quickly,” Knapp said. “Sterling Heart Care has expanded into a suite of services that we have tinkered with and know how to operate, and we partner with cardiologists and cardiology groups to build these centers … It was a random opportunity, I never expected this to be something I’d be doing in my life.”

Morris Titanic had a more sudden ending to his hockey career, but it resulted in a job within the publishing industry that he’s held onto for decades.

Originally from Toronto, Titanic grew up as many Canadians did: playing hockey in the street, on a frozen pond, and eventually on the ice.

“You just grew up playing with a gang of guys,” he said. “I remember watching Hockey Night in Canada on the old black and white tube, and then eventually playing with guys in the street … It’s not a cliché, frozen ponds are exactly where we learned to play the game. Just 20 or so guys out there chasing a puck around.” His talent grew and grew, and eventually, he began playing juniors for the Niagara Falls Flyers, which later became the Sudbury Wolves, in the OHL in the early 1970s. His play for Niagara Falls and Sudbury caught the eyes of NHL teams, and in 1973, he was selected by the Sabres 12th overall in the first round of the NHL Draft.

Titanic went on to play in 19 regular season games as a Sabre, and was a member of the 1974-75 team that went to the Stanley Cup Final.

“I was working at a gas station pumping gas, and one of the mechanics in the back said he heard on the radio I got drafted by Buffalo, and I just thought ‘okay, great,’” Titanic said. “Being a part of the Sabres organization in the 70s was really something because the city was so hockey crazy. We had a really good team … It was lots of fun, a great group of guys.”

Injuries forced an early end to Titanic’s career after just two seasons in the NHL, meaning his transition into the work world came suddenly. However, after spending six years as a coach for the Buffalo Jr. Sabres, he found his passion in publishing, and has been in the commercial printing business for the past 35 years.

Despite being from Canada and only spending two years as a pro in Buffalo, he has called the city his home ever since his retirement. “When you’re a professional athlete you think you’re impervious to everything, but that’s obviously not the case,” Titanic said. “The sales side of [commercial printing] really appealed to me, I like being able to get out and talking to people, meeting people, not sitting behind a desk all day … Earning commission was great because I could challenge myself, earn a living for my family, and I loved the challenge.” Finally, in a similar fashion to Knapp, Maddie Elia found a love for hockey through family.

“I have a lot of boy cousins, and they all played hockey, so I just played with the boys up until high school,” Elia said. “My dad and mom actually never played hockey, so it’s funny that that’s the path that I went. I think it was all just influence from my cousins and wanting to play and be like them.”

Elia grew up in Western New York and attended Nichols School, playing for the girl’s team there and eventually being recruited to play at Boston University. While playing for the Terriers from 2013-2017, in 145 games, she tallied 47 goals and 65 assists.

Her play at BU was enough to get herself drafted, as the Buffalo Beauts selected her 18th overall in the 2016 NWHL Draft.

“I didn’t know that I was going to be drafted,” she said. “I think I got a Twitter notification that said Buffalo drafted me, and I was just like ‘oh, that’s cool.’ I wasn’t really sure if I was going to continue playing after college … but it ended up working well with my first job out of college being flexible with my hockey schedule.”

Elia played just two seasons with the Beauts, but she left her mark on the NWHL. In 34 career games, she averaged over a point per game, finishing her career with 35 points.

“Playing with girls in the NWHL that you never thought you’d be playing with professionally, that was really cool,” Elia said. “I always joked that I never scored that much, but that [18-19] season I just kept scoring … We had two really close teams, it’s something that none of us will ever forget. I just wish we could have won a championship.”

Graduating from BU with a degree in communications, when it came time for Elia to move on from professional hockey, she made the decision to stay in Buffalo, and as luck would have it, she found a position thanks in part to a connection with a former boss. She’s now a social media director for Dave & Adam’s Card World, working to promote the company’s products on social media sites and interacting with followers within the booming business of sports cards and memorabilia.

Hockey has remained a part of Elia’s life, too, as she helps coach in the NHL’s Learn to Play program, teaching young kids the basics of the game.

“My transition out of hockey probably would’ve been a lot harder, but because of COVID nobody could really play,” Elia said. “I’ve always been into social media, graphic design, so it’s been a lot of learning new stuff, stuff I’ve never done before. But it’s been really, really cool, especially being immersed in the sports world and cards world, which has just been such an exploding hobby … Just to be in the midst of something new and exciting, it’s been amazing.” This feature article is part two of a three part series on professional sports players who have pivoted their careers in Buffalo.

Art in the Open All Yearlong

While arts organizations continue to navigate the ...Read More