Walking up to St. Benedict’s Church in Eggertsville, I could sense something special about it, but wasn’t sure just what. It was something unusual, something unique, but what was it, exactly? It wasn’t the architecture – in fact the last Mass Mob, at St. Bernard’s in Kaisertown, was held in a church designed by the same architect built about the same time using similar stone. But not wanting to be late for Mass, I’d have to figure it out later. Yet even after Mass, as I lingered to take photos of the exterior, the church grounds, the school next door, the statuary, and even the banded patterns in the sandstone, I still didn’t get it. It wasn’t until I was walking away to head back into the city, and turned for one final photo (lead image), that it hit me like a ton of sandstone: the church faces neither Main Street nor Eggert Road, but the intersection. It doesn’t look at the building across Main Street or at the building across Eggert Road. Instead, it looks at you. The church faces you, who are coming into its town and its parish, whether from the south or the west, and welcomes you.

It’s low key and simple, yet profound. I know of no other traditionally designed Catholic Church that is oriented this way. It’s as if the parishioners who built the church in the 1950s pivoted thousands of tons of masonry just to make sure that as you approach, you and the church will see each other. Not just see each other, but visually engage. You can’t hurry past with just a glance.

But it was more than just the building – I felt the same low-key welcome in visiting Mass. I wasn’t there long before falling into a conversation with one of the ushers about the church and the stained-glass windows and the usher’s lifelong involvement at the parish. After Mass I found myself with a group of parishioners whose experience with the parish also went back to childhood. That kind of generational involvement is common in city churches, but it was good to be reminded it exists in suburban churches, as well. One of the parishioners showed me the stained-glass windows, and told me that a late deacon of the church used to give a stained-glass tour that was better attended than Mass. (One of the windows features dice, which figure in the Crucifixion story.) Another told me how the church once had nearly a dozen Masses every weekend – including a “high Mass” in Latin – with every one packed. And, of course, there was the obligatory story of getting whacked by the nuns in the church’s school. Len Swiat, who took the photos used on the church’s website, told me of growing up just steps away from the church, and being able to walk to UB South Campus for college.

I was especially impressed to learn that the church is not only welcoming to those approaching it from the street, and those coming in the doors, but to immigrants and refugees, as well. The church has been involved with settling two families in partnership with another church. The church is also raising funds for an extraordinary project to create and install the first reproduction anywhere of the sculpture recently unveiled at the Vatican by Timothy Schmalz, best known for his Homeless Jesus sculptures like the one installed in Buffalo’s Shelton Square in 2015.

This sculpture, Angels Unawares, is a direct response to the worldwide crisis in immigrant and refugee resettlement. According to sculptor Timothy Schmalz,

On the 26th of April 2017, the original small model was blessed by Pope Francis in St. Peters Square and the larger version of the work was confirmed to be permanently installed in St. Paul’s Basilica in Rome.

The inspiration of the work arises from a passage from Hebrew 13:2 found in the  New Testament: “Do not neglect to show hospitality to strangers, for thereby some have entertained angels unawares”.

The sculptural work interprets this belief that there is to be found the sacred in the stranger, in terms of the refugee and migrant people. The work depicts migrants and refugees from all cultural and racial backgrounds and from all historic periods of time together – shoulder to shoulder on a raft or boat. Within this diverse crowd of people, angel wings are visible in the center, suggesting that within the migrant and refugee is the sacred.

Parishioner Len Swiat told me that the parish believes that its presence at one of the county’s most prominent intersections will make it an ideal platform for the sculpture to be highly visible. In announcing the parish’s plan, previous priest Father Mock said, “The sculpture will be a symbol of the parish’s long connection to migrants, which continues to this day. St. Benedict’s founding pastor, Monsignor William Tobin, was an immigrant from Ireland, and the parish recently assisted the resettlement of two refugee families, in collaboration with St. Peter’s Episcopal Church in Amherst and Journey’s End.”

You can learn more about this effort here, with a link to donate.

As for the history of the parish and its school and the current church, happily that’s already written and available here. Especially interesting is the parish’s connection to a North American saint. According to the parish history,

A long time ago, in the early 1900’s, many immigrants were beginning the settle in our area, mostly German and Irish immigrants. Our area was mostly woods and farm lands. Catholics gathered in their homes for prayer.

A holy missionary priest traveled by foot and horseback to celebrate Mass and marry young couples who wanted to start their families. He had holes in his shoes from walking, and often, he fell off of his horse. He started many family groups of Catholics as far as Kenmore, Buffalo, and Tonawanda. He was St. John Neumann.

Today, the town and the parish and the parishioners are considerably more prosperous than in those early years, which may cause you to wonder why the Buffalo Mass Mob would be paying a visit. After all, wasn’t the Mass Mob formed largely to give a boost to often-overlooked, primarily urban churches? Indeed, but as I’ve pointed out in other recent Mass Mob posts, with the overall decline in Catholicism that has resulted in – and then been furthered by – closings and mergers of parishes and churches and schools, there are fewer and fewer Catholic parishes that couldn’t use a boost. But especially since last year, when the clergy abuse scandal and leadership crisis in the diocese has become the dominant issue in local Catholicism and caused many to withhold their attendance and contributions, there isn’t a single parish that hasn’t been affected. Thankfully, events this month offer the promise of a better future in our diocesan leadership. But much damage has been done.

At St. Benedict’s, there has never been a better time for a visit by the Mass Mob – perhaps including you as all are welcome regardless of religious affiliation. The parish just began the celebration of its centennial year, to culminate on its anniversary next November. And after the retirement of its long-serving priest Father Mock, the parish is now sharing a priest, Father Zapfel, with nearby St. Leo the Great Parish. Due to this arrangement, St. Benedict’s had to discontinue its 11:30AM Mass on Sundays. My visit happened to coincide with the last one.

And like any building a half-century old, St. Benedict’s needs increased, and increasingly expensive maintenance. In showing me the stained-glass windows, the parishioner was surprised to find a jagged gap where a small piece was missing, and made a note to inform the parish council. But as with the other churches I’ve written about since last year, St. Benedict’s keeps on keeping on, with parishioners welcoming each other and immigrants and refugees and visitors of all kinds. They look forward to welcoming the Buffalo Mass Mob this Sunday. 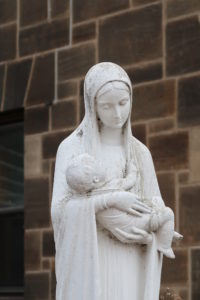 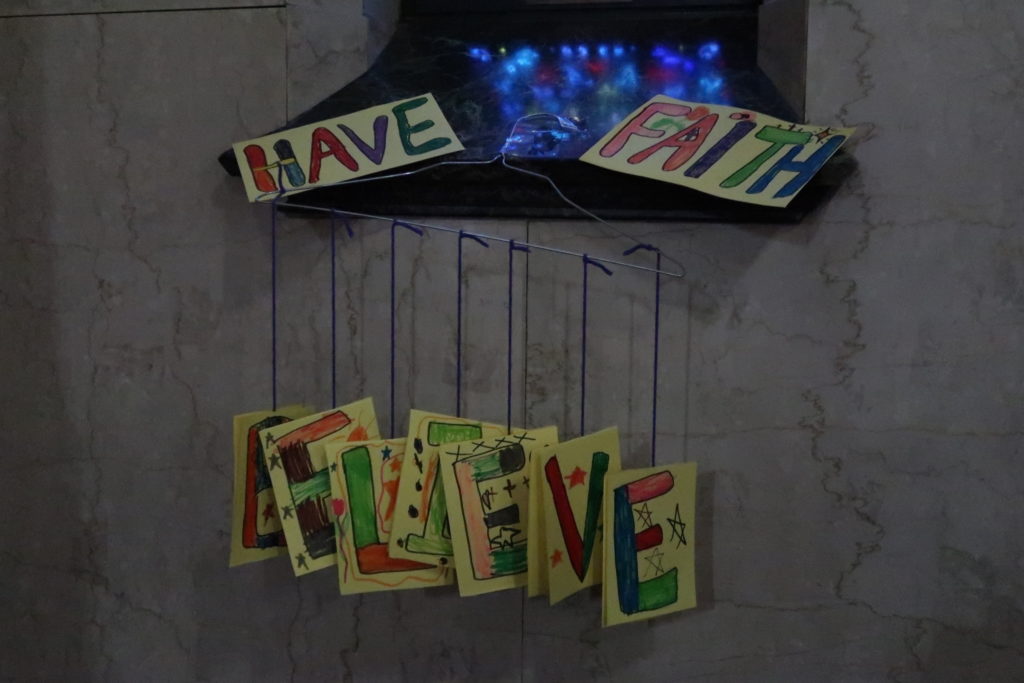 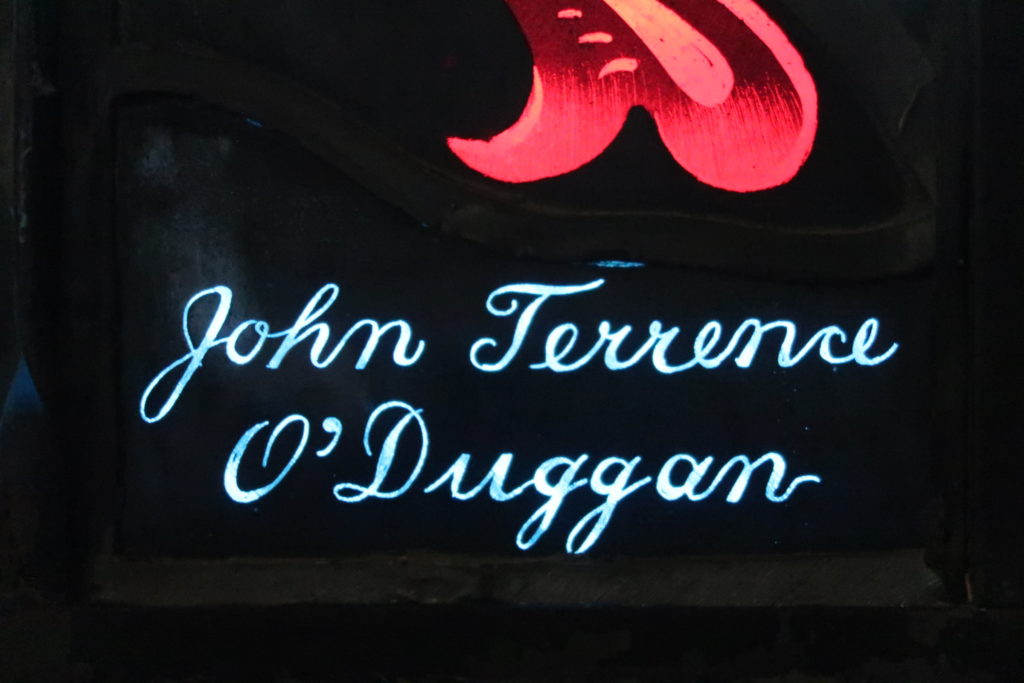 While Buffalo's mural scene has taken off in recen...Read More